PHOTO: Nick & Jo Lillie, pictured with mother Pat Lillie, had the Best Presented Pen of Steers for this pen of Hereford Steers that Charles Stewart & Co. sold for 310c/kg (406.3kg), $1259.52ph. Nick said he was very happy with today’s prices.

Today’s store sale consisted of close to 700 cattle, with the top price of grown steers being 318c/kg for a pen of Black Baldy’s weighing 396kg, with most grown Angus Steers in the 305-318c/kg price bracket..

The weighed weaners made up to 310c/kg for a pen of Angus Steers, and ranged from 296-310c/kg, while the open auction steers got to $960 per head on two occasions for pens of Angus Steers.

The grown heifers topped at 290c/kg (for a weight of 394.5kg), and the weighed weaners topped at 280c/kg (301kg). The Heifer job was slightly easier than last month, mostly due to the lower numbers this month, however open auction Heifers topped at $870 per head, which held firm on last month’s market.

Cows & Calves made up to $1560 per head, with young calves on them. This pen was a very well bred pen of Angus Heifers.

Overall the sale was a very solid and firm sale. With plenty of grass around, people didn’t rush their cattle in to sell them, hence the lower numbers.

We have a very good store sale coming up in November, which is expected to have 3500 – 4000 cattle on offer. 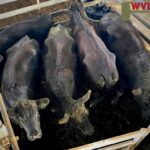 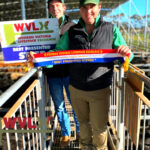 Draw & Yarding is in for Monday's Prime Sale at WV

All members of the general public are restricted from livestock sales until further notice.