A very good yarding of about 2800 cattle, with a lot of weight in the yarding showing the effects of the very good season we’re having down in the South West.

There was a very good run of weaner cattle presented today, reaching a high of 338c/kg and consistently making 320-330c/kg with a lot of weight in them, with the top end at 400kg. There weren’t a lot of open auction steers today due to the weight, but they topped at $1130, consistently making $900-1000.

There were a few pens of 450-500kg Heifers which topped at 294c/kg, mostly making between 275-290c/kg. The next run very consistently made 270-290c/kg. There was a big difference with restockers and breeders buying Weaner Heifers, with probably a 50 cent premium for cattle that went back to the paddock to breed from, topping at 350c/kg and averaging 320-350c/kg. Other Heifers made 270-285c/kg.

Open Auction Heifers topped at $900. There were a few pens of F1 Heifers which made to $1140, and there was a mixed run of Cows and Calves with the top reaching $1750, being a lot dearer than last sale. There was also  a good run of cros-bred cattle topping at 262c/kg, mostly ranging from 250-260c/kg, and there were 8 or so pens of Friesian steers which consistently made 250c/kg.

All in all a very solid sale for the November WVLX store sale with a large crowd in attendance. There was a lot of weight in the cattle and this equated to big dollars per head. 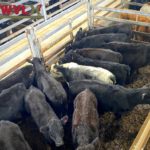 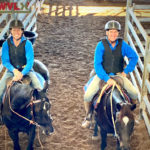 HF Richardson had unreal results at our weekly pri

There was 399 bullocks lined up ready for auction

Congratulations to Colin & Barbra Hill who sold a

Colleen Page & Ian Gladman are always all smiles a

All members of the general public are restricted from livestock sales until further notice.